The Balfour and District Business and Historical Association (BDBHA) 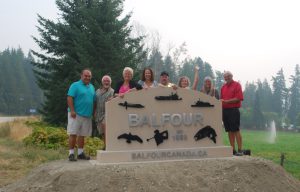 At the BDBHA, our mission is to preserve the integrity of the Balfour and District communities and assist local businesses to grow and prosper. This means that, through communication, collaboration and fostering positive change, our goal is to enhance the hospitality and prosperity of our community. The BDBHA is guided by a volunteer Board of Directors who are committed to playing an active role in securing a strong and diverse economic future for Balfour and its surrounding district. 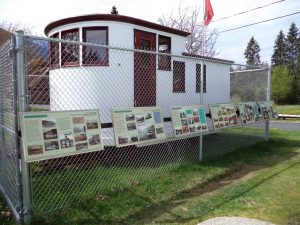 Since its inception in 2006, the BDBHA has been involved in several projects aimed at promoting tourism and preserving our rich and varied history. One project was the construction of monuments advertising the leisure activities and history of Balfour. Another was the release in 2013 of the 25th Anniversary Edition of the Kootenay Outlet Reflections. In 2014, after years of fundraising and painstaking restoration work by volunteers, the MV Anscomb’s original wheelhouse was opened to the public. The BDBHA was instrumental in seeing the former Kootenay Lake ferry’s wheelhouse fully restored, including some of its original navigational instrumentation. 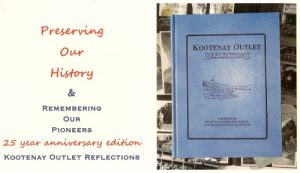 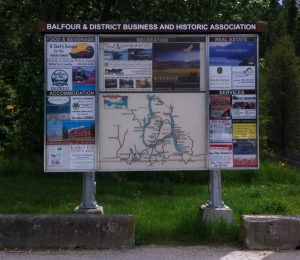 The BDBHA has also been active behind the scenes promoting Balfour and District businesses. Partnering with businesses, they have offered low-cost advertising opportunities such as the East-Shore billboard, Superette signage as well as brochure racking and TV advertising on Kootenay Lake ferries. The “Take The Scenic Route” signage at Kidd Creek east of Creston and at the information pullout west of Castlegar are other advertising initiatives by the BDBHA. The Association also helps its members by providing website exposure and assisting in sourcing grant opportunities and writing grant applications.

The History of Balfour

In the early 1880’s, the area now known as Balfour was considered as a possible terminal site for the Columbia and Kootenay Railway. The proposed railway was expected to follow the Kootenay River from the Arrow Lakes to the Balfour area, with the line following along the north-shore of Kootenay Lake’s West Arm. Nothing became of the scheme and the railway was never built.

Balfour’s next and proper start as a place on the map, came in 1889, when Charles W. Busk, a young Civil Engineer and Land Surveyor from Greenwich, England, staked a large 200 acre pre-emption claim for a townsite he named Balfour. A man of vision and energy, Busk believed that Balfour was poised to become the “the centre of the farming, fruit farming and gardening sections of the lake country” and he eagerly set to work developing his site. He arranged for the streets to be cleared and graded and he named them after himself (Charles, Westly) and members of his family (his brother Robert and his sisters Gladys and Madeline) as well as other close friends and associates. Busk planted his own fruit orchard, bringing in some seedlings from Victoria. In 1892, Busk sold the Balfour townsite to a Victoria real estate firm, Pemberton & Son. Even after the sale, his dream for Balfour never wavered. He would later donate land and provide funds for a church to be built and was involved in a small navigation company, having a beautiful steam launch brought over from England and purchasing a second steamer from the West Coast. 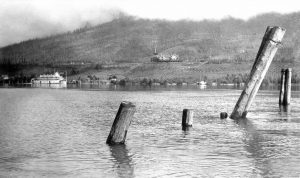 Over the next two decades, Balfour grew slowly as new settlers arrived and cleared land. Most planted orchards, but others had poultry and livestock farms. By 1910, the Balfour shoreline south of the Outlet and up on the bench overlooking the West Arm was dotted with small farms and homes.

In 1910, the CPR built a ‘first-class’ summer tourist hotel on the Balfour bench. Designed in Tudor Revival style, the impressive Kootenay Lake Hotel featured such amenities as a reading and writing room, a billiard room, a bar, a barber shop, a buffet and a large dining room that could seat 200 guests. Outside, there were 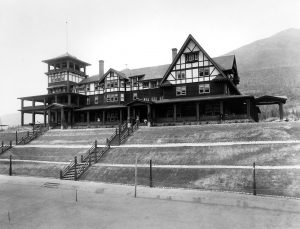 tennis courts, a cable-winched tramcar to take guest from the wharf and boat livery to the Hotel. Never intended to be operated year-round, the Hotel’s months of operation were from were from the first of June to mid-October. Sadly, the Hotel was only in operation a few years before the start of the First World War  and it closed its doors in September of 1916. The following year, it was leased by the Military Hospitals Commission for soldiers inflicted with tuberculosis and other lung disorders. Operating as the Balfour Sanatorium, the hospital had accommodations for 150 patients and hospital staff. Patients at the ‘San’ were offered various types of vocational retraining depending on whether or not they were bed ridden. Sales of products made by patients were through commercial outlets; buying items directly from patients, the so-called “compassionate sales”, were taboo. The patients and staff built a small 5-hole golf course below the facility that was later expanded to 9-holes. The ‘San’ closed in 1921. After languishing empty for eight years, the imposing building was finally torn down in 1929. While in operation, as both a tourist hotel and a sanatorium, the facility had a buoyant effect on Balfour’s economy, which took years to recover from after the hotel closed. 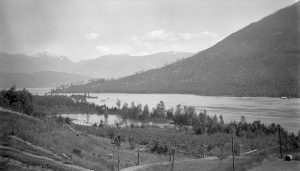 Not long after the Kootenay Lake Hotel opened its doors in 1912, the Provincial Government completed a road along the North-shore from Nelson to Balfour. A small cable ferry was installed to shuttle motorists across the West Arm (at the site of the present day Orange Bridge) so they could travel ‘up the Lake’ to summer cottages and fishing destinations in their buggy-topped automobiles. One favourite spot was The Balfour Beach Inn, but there were other places as well where cabins and boats could be rented. In 1925, the highway was extended north to Ainsworth and Kaslo. When the CPR curtailed passenger steamer operations on the Lake in 1931, the highway became the principal means for Balfour residents to reach Nelson for a day of shopping, buying supplies for the farm and for entertainment.

As a destination location for summer fun, fishing and picnics, Balfour enjoyed a steady growth in popularity after the Second World War. The area boasted resorts, auto courts, boat liveries, inns, trailer parks and marinas. When the Provincial Government established ferry service across Kootenay Lake in 1931, the first run was 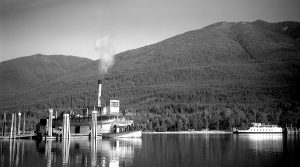 from Gray Creek to Fraser’s Landing (located about 2.6 kilometers west of the current Balfour ferry landing) and then, in 1947, the route was shortened to its present terminal locations of Balfour and Kootenay Bay.

In recent years, the number and variety of businesses and artisans in Balfour and the surrounding area has continued to expand. Along with this growth there has also been a boost in  new home construction, some as permanent dwellings others as vacation properties. A new 9-hole Golf Course opened in the late 1980’s has now been expanded to 18-holes. As Balfour continues to mature as a community, new infrastructure projects are underway. New arrivals are learning what current residents have known all along; Balfour is the place to enjoy an active rural lifestyle, savor clean living and appreciate a collection of locally-owned shops and businesses, while still only minutes away from numerous regional attractions.